I traveled a long way seeking God,
but when I finally gave up and turned back,
there He was, within me!

O Lalli!
Now why do you wander
like a beggar?
Make some effort,
and He will grant you
a vision of Himself
in the form of bliss
in your heart. 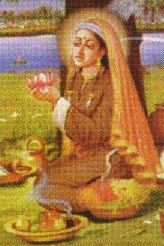 Little is known with certainty about her life, other than hints that come to us through her poetry and songs.

She was a young bride, married, tradition says, at the age of twelve. After moving into her husband’s family home, she was abused by her mother-in-law and ignored by her husband.

A story is told about “Lalla’s Lake” — one day when returning from the well with a clay water jug on her head, her husband lost his temper over her delay and struck the jug in his anger. The clay vessel broke but, miraculously, the water held its shape above her head. This becomes an important symbol of the heavenly nectar that rains down from the crown.

Finally, Lalla could endure no more mistreatment and, in her early 20s, she left. She became a disciple of a respected saint in the Kashmir Shaivism tradition of yoga and she took up the life of a holy woman dedicated God in the form of Shiva.

Lalla’s songs are short, using the simple, direct language of the common people, yet she touches on complex yogic techniques and the most elevated states of awareness.

The name Lalla can be translated as either “seeker” or “darling.”

Lalla is deeply loved by both Hindus and Muslims in Kashmir today, even amidst the terrible fighting ravaging the land. There is a saying that in Kashmir only two words have any meaning: Allah and Lalla.