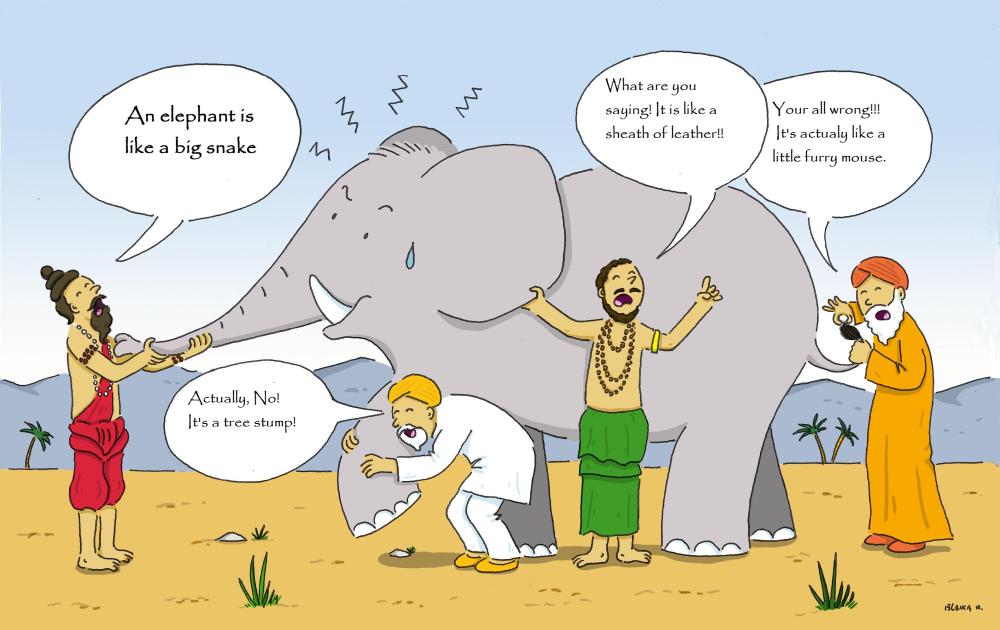 “Blind Men and an Elephant”

The parable of the Blind Men and an Elephant originated in the ancient Indian subcontinent, from where it has been widely diffused.

The first version of the story itself is traceable to the Buddhist text Udana 6.4, dated to about mid 1st millennium BCE. According to John Ireland, the parable is likely older than the Buddhist text.

It is a story of a group of blind men who have never come across an elephant before and who learn and conceptualize what the elephant is like by touching it.

An alternate version of the parable describes sighted men, experiencing a large statue on a dark night, or feeling a large object while being blindfolded. They then describe what it is they have experienced

The tale later became well known in Europe, with 19th century American poet John Godfrey Saxe creating his own version as a poem, with a final verse that explains that the elephant is a metaphor for God, and the various blind men represent religions that disagree on something no one has fully experienced

In some versions, they stop talking, start listening and collaborate to “see” the full elephant.

In another, a sighted man enters the parable and describes the entire elephant from various perspectives, the blind men then learn that they were all partially correct and partially wrong. While one’s subjective experience is true, it may not be the totality of truth. 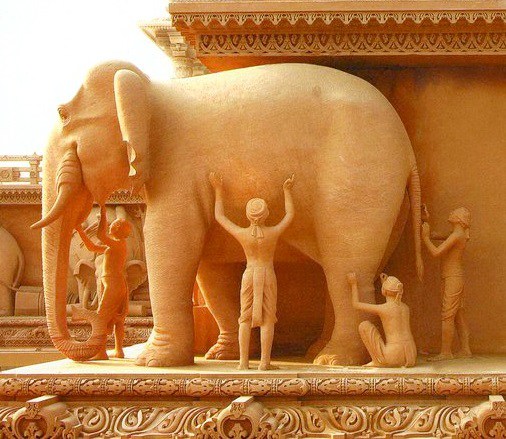 THE POEM: “THE BLIND MEN AND THE ELEPHANT”

IT was six men of Indostan
To learning much inclined,
Who went to see the Elephant
(Though all of them were blind),
That each by observation
Might satisfy his mind.

The First approached the Elephant,
And happening to fall
Against his broad and sturdy side,
At once began to bawl:
“God bless me!—but the Elephant
Is very like a wall!”

The Second, feeling of the tusk,
Cried: “Ho!—what have we here
So very round and smooth and sharp?
To me ‘t is mighty clear
This wonder of an Elephant
Is very like a spear!”

The Third approached the animal,
And happening to take
The squirming trunk within his hands,
Thus boldly up and spake:

The Fourth reached out his eager hand,
And felt about the knee.
“What most this wondrous beast is like
Is mighty plain,” quoth he;
“‘T is clear enough the Elephant
Is very like a tree!”

The Fifth, who chanced to touch the ear,
Said: “E’en the blindest man
Can tell what this resembles most;
Deny the fact who can,
This marvel of an Elephant
Is very like a fan!”

The Sixth no sooner had begun
About the beast to grope,
Than, seizing on the swinging tail
That fell within his scope,
“I see,” quoth he, “the Elephant
Is very like a rope!”

And so these men of Indostan
Disputed loud and long,
Each in his own opinion
Exceeding stiff and strong,
Though each was partly in the right,
And all were in the wrong!

So, oft in theologic wars
The disputants, I ween,
Rail on in utter ignorance
Of what each other mean,
And prate about an Elephant
Not one of them has seen!

The parable has been used to illustrate a range of truths and fallacies; broadly, the parable implies that one’s subjective experience can be true, but that such experience is inherently limited by its failure to account for other truths or a totality of truth. At various times the parable has provided insight into the relativism, opaqueness or inexpressible nature of truth, the behavior of experts in fields of contradicting theories, the need for deeper understanding, and respect for different perspectives on the same object of observation.

A quote from Rumi:

Day and night foam-flecks are flung from the sea: oh amazing!

You behold the foam but not the Sea.

We are like boats dashing together; our eyes are darkened, yet we are in clear water.

So, while we listen to the many “truths” and perspectives let us keep an open mind,  and not fall in the trap of getting “polarized” in our views.  Most information we receive on a daily basis is biased,  and just because it’s repeated 1000 times does not make it objective.

Let us use our discernment, maintain our objectivity keep our minds open, listen to the many perspectives, and as one wise friend said to me many times, ultimately see “how things make you FEEL”, that is how you get off from your mind and into your heart (your compass).

Remain calm and serene,  and pass everything through the filter and wisdom of your heart.

Let us work for solutions to our problems in unity, not in division, polarization and wars.

Keep your eyes as well as your hearts open!

“Behold, I send you out as sheep in the midst of wolves; so be wise as serpents and innocent as doves.”  Matthew 10:16