Saint Patrick’s Day, it’s a feast day (March 17) of St Patrick, patron saint of Ireland. Born in Roman Britain in the late 4th century, he was kidnapped at the age of 16 and taken to Ireland as a slave.  He spent six years there working as a shepherd and that during this time he “found God”. The Declaration says that God told Patrick to flee to the coast, where a ship would be waiting to take him home. After making his way home, Patrick went on to become a priest. He returned about 432 to convert the Irish to Christianity. By the time of his death on March 17, 461, he had established monasteries, churches, and schools. Many legends  grew up around him—for example, that he drove the snakes out of Ireland and used the shamrock to explain the Trinity. Ireland came to celebrate his day with religious services and feasts.

Emigrants, particularly to the United Sates transformed St. Patrick’s Day into a largely secular holiday of revelry and celebration of things Irish.

Boston held its first St. Patrick’s Day parade in 1737, followed by New York in 1762. Since 1962 Chicago has coloured its river green to mark the holiday. (Although blue was the colour traditionally associated with St. Patrick, green is now commonly connected with the day.)

Some of the most popular traditions developed to celebrate this day such as “wearing of the green”—sporting an item of green clothing or a shamrock, the Irish national plant, in the lapel. Corned beef and cabbage are associated with this holiday, and even beer is sometimes dyed green to celebrate the day.

Saint Patrick’s Day is a public holiday in the Republic of Ireland, Northern Ireland, the Canadian province of Newfoundland and Labrador (for provincial government employees), and the British Overseas Territory of Montserrat. It is also widely celebrated by the Irish diaspora around the world, especially in the United Kingdom, Canada, United States, Brazil, Argentina, Australia, and New Zealand. 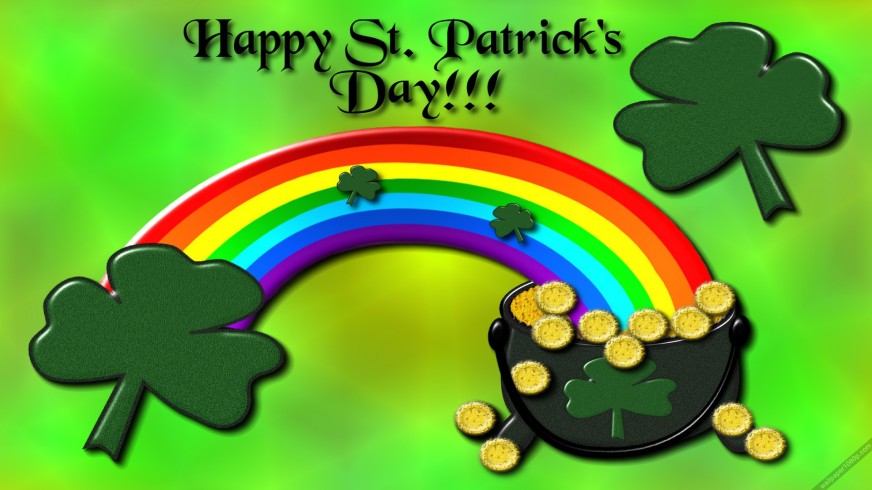