The poinsettia is native to Mexico,  Central and South America, where it is known as Flor de la Noche Buena or “Flower of the Holy Night”. An ornamental shrub, it is believed to have been used as a Christmas decoration as early as the 17th century when Franciscan monks near Taxco, Mexico incorporated the plant in their Nativity processions.

In  an area of southern Mexico known as ‘Taxco del Alarcon’ they flower during the winter. The ancient Aztecs called them “Cuitlaxochitl”, meaning “flower that grows in residues or soil” . The Aztecs had many uses for them including using the flowers (bracts)* to make a purple dye for clothes and cosmetics and the milky white sap was made into a medicine to treat fevers. (Today we call the sap latex!)

In 1828, Joel R. Poinsett, then U.S. ambassador to Mexico, was introduced to the plant and brought it back with him to America. Poinsett’s love of botany led him to cultivate the plant at his home in South Carolina and share specimens of it with friends and botanists.

In the U.S., the plant was later christened the ‘poinsettia’ in honor of the first American to discover it, and in 1836 Congress declared December 12 National Poinsettia Day to commemorate the death of Joel Poinsett. Their botanical, or latin name is ‘Euphorbia pulcherrima’ (it means, ‘the most beautiful Euphorbia’).

Today it is known in Mexico and Guatemala as  “Flor de la Noche Buena”, meaning Christmas Eve Flower. In Spain it is known as Flor de Pascua or Pascua, meaning Easter flower. In Chile and Peru, the plant became known as Crown of the Andes. In Turkey, it is called Atatürk’s flower because Atatürk, the founder of the Republic, liked this flower and made a significant contribution to its cultivation in Turkey. In Hungarian, it is called Santa Claus’ Flower, and it’s widely used as a Christmas decoration.

The bright red petals, often mistaken for flowers, are actually the upper leaves of the plant called bracts* and the tiny flowers are nestled amongst the bracts. Though widely thought to be poisonous to humans, this is actually a myth. According to the POISINDEX, used by most U.S. poison control centers, a 50 lb. child would need to consume more than 500 leaves of the plant to reach a potentially fatal dose of the compounds found in poinsettias. The bitter taste of the plant ensures that most humans and animals rarely take more than one bite.

The old Mexican legend tells of a girl, commonly called Pepita or Maria, who was too poor to provide a gift for the celebration of Jesus’ birthday and was inspired by an angel to gather weeds from the roadside and place them in front of the church altar.

She felt embarrassed because she could only give this small present to Jesus. As she walked through the chapel to the altar, she began to feel better, she knelt down and put the bouquet at the bottom of the nativity scene. Suddenly, the bouquet of weeds burst into bright red flowers, and everyone who saw them were sure they had seen a miracle.

From the 17th century, Franciscan friars in Mexico included the plants in their Christmas celebrations. The star-shaped leaf pattern is said to symbolize the Star of Bethlehem, and the red color represents the blood of  the crucifixion of Jesus.

Today there are over 100 cultivated varieties of poinsettia. The colored bracts are most often flaming red but can be orange, pale green, cream, pink, white, or marbled.

In areas outside its natural environment, it is commonly grown as an indoor plant where it prefers good morning sun, then shade in the hotter part of the day. Contrary to popular belief, flowering poinsettias can be kept outside, even during winter, as long as they are kept frost-free. The plant requires a daily period of uninterrupted long, dark nights followed by bright sunny days for around two months in autumn in order to encourage it to develop colored bracts. 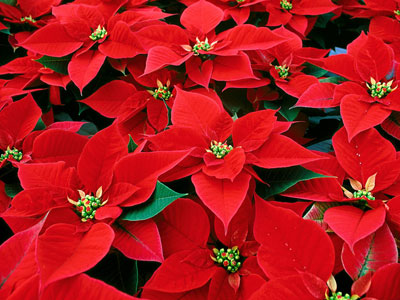