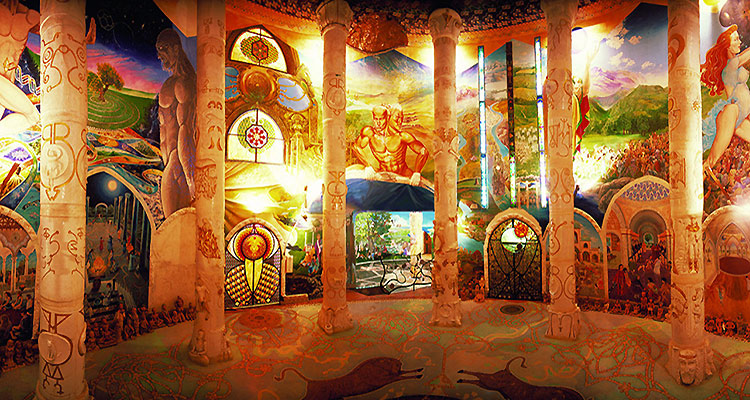 Permission requested and granted from Damanhur to post this article. For more information please visit:
https://www.thetemples.org/tour/

The Temples of Humankind are exquisite works of art, a complex of eight halls adorned with remarkable paintings, mosaics, sculptures and glass art-all created to celebrate universal spirituality.

The Temples were constructed through the ingenuity and creativity of Damanhurians, who worked together to excavate the rock of a mountain entirely by hand. It is an “impossible” dream that awes and inspires thousands of visitors every year. The Temples are a stunning example of sacred and secular art coming together to resonate values that are important to the whole of humanity.

Every year thousands of people from all over the world visit this large contemporary cathedral. Many use it as a tool for personal research, and to open within themselves new paths to inspiration and creativity.

The Temples can be visited every day. They are available for individual or group meditation, to celebrate life’s milestones such as a wedding or the welcoming of a newborn child.
For those who love art and architecture and are looking for a new frontier of human ingenuity and creativity, for those who want to discover how a group of people succeeded in realizing an “impossible” dream and created an extraordinary underground construction, excavated by hand inside the rock…

The Hall of Water, of the Earth, of the Spheres, of Metals, the Blue Temple and the Labyrinth: the Temples of Humankind are like a large book of knowledge dedicated to universal spirituality. The images and symbols within the Temples awaken the sense of the sacred that is the fundamental inheritance of every human being.

The Temples of Humankind have been built at a meeting point of the Synchronic Lines, the “rivers” of energy that link the Earth to the cosmos. A visit or a meditation in the Temples create an opportunity to tap into this extraordinary potential for one’s own spiritual, artistic and personal growth. 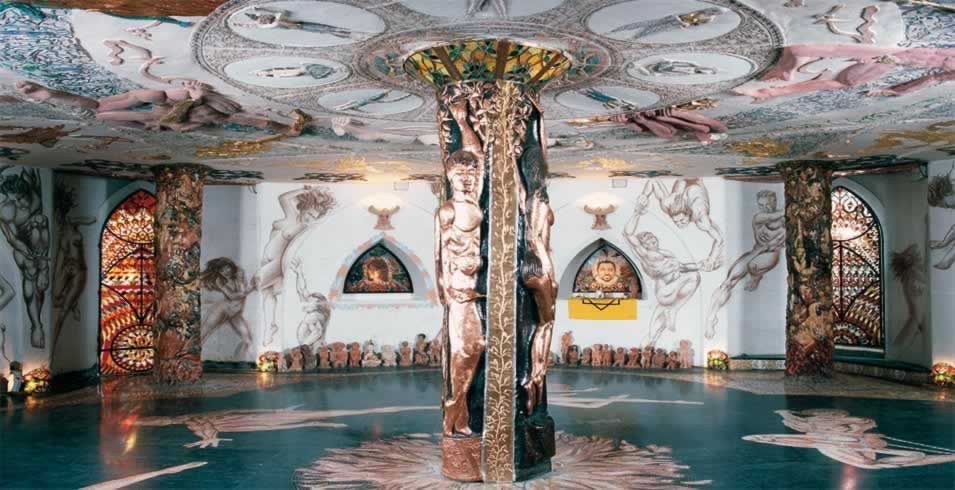 History of the Temples of Humankind

Birth of the Temples

The first pick struck the rock on a warm August night. It was a Saturday evening in 1978. Oberto and about ten other Damanhurians sat around a fire. It was in a clearing behind a house in the shelter of Vidracco hill.
A large star fell across the sky, a sight rarely ever seen, bright and slow. It left behind a trail of visible gilded stardust that fell to Earth.
It was a positive sign; a good moment to begin to dig a tunnel into the mountain, towards the heart of Earth, to create a synchronic contact, to build a temple the likes of which had not existed. Everything would have to be created by hand and will power, in a job of work that nobody at the time could possibly conceive of.
These unexpected words of Oberto Airaudi had been so vital and full of expectation that, as soon the meeting was finished, two of those present began to dig at the designated point. They had only a hammer and a pick, but they continued to dig with great fervour all night until the morning and when others came to take over, they had already dug over a meter inside the mountain.
The turns continued non-stop with groups of people working for four hours at a time, for fifteen days, then the pace relaxed a little, but they never stopped, and everyone participated with equal ardour.
The digging was done with only a hammer and chisel, shovel and pick and a curved pick which was bought specially. The tunnel continued to be dug on into the side of the mountain. 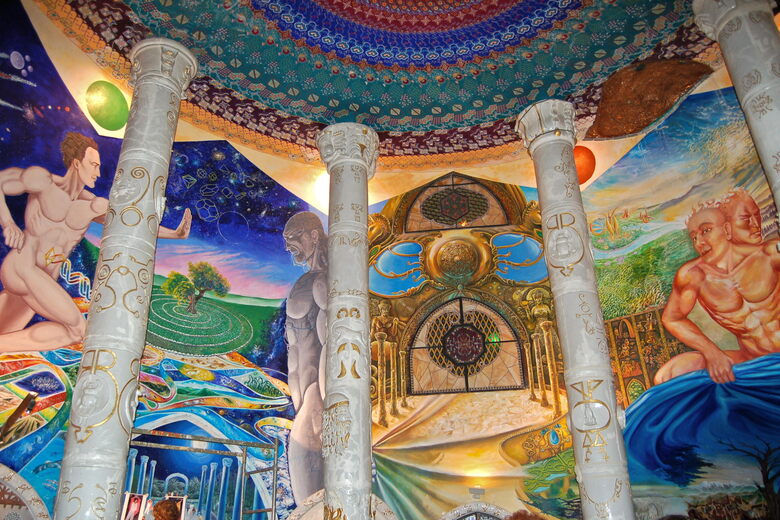 For the fifteen busy people involved in the job, digging inside the mountain was synonymous with digging inside of oneself: The enjoyment and the serious importance of the work strengthened their union and friendship.

In 1992, an anonymous letter was sent to the local Carabinieri station asserting that there were secret temples hidden at Damanhur. On several occasions the police investigated these claims and could never find access to the Temples, so officials doubted the veracity of the rumors. In July, the discontented individual fixated on exposing the Temple, finally convinced the police to organize another raid. Armed again, the Carabinieri arrived at seven o’clock in the morning, accompanied by State Prosecutor, Bruno Tinti, the official who had ordered the incursion. The police threatened to dynamite the mountain if the Damanhurians didn’t reveal their “secret temples”, so the decision was made to show the excavated sanctuaries to Tinti and three of the Carabinieri. A fourth policeman followed them into the Temples of Humankind and captured the private tour on film.

An hour later, tearful and overcome by the profound beauty of the Temples, the group emerged. The Prosecutor put his hand on the shoulder of Damanhur’s founding member, Oberto Airaudi, saying simply, “We must do something to save the Temples.” In Italy, there were no laws to govern or protect such an underground structure, erected without planning or permission.

On October 9, 1992 the first press conference was held in Damanhur to announce the existence of the Temples of Humankind. Immediately, they faced much opposition that urged the local authorities to have the Temples destroyed. A long harsh court battle ensued. Damanhurians launched a worldwide crusade to save their sacred building, collecting signatures from a growing number of international supporters. To raise awareness and assistance in their campaign, journalists and television crews were invited into the underground chambers to experience and publicize the spiritual and artistic marvel that had been created. Finally, in June 1996, with the support of the Beaux Art Authority, the Italian Government approved a change in the law to legalize the underground structure. After four years of uncertainty and continuous effort, the Temples were saved! With the secret of the Temples disclosed to the world, the Damanhurians new challenge would be to protect the sanctuary while allowing the public to support and enjoy this most sacred and magnificent refuge inside of a mountain.

From “The Temples of Humankind”, Esperide Ananas, Val Ra Damanhur 2006. 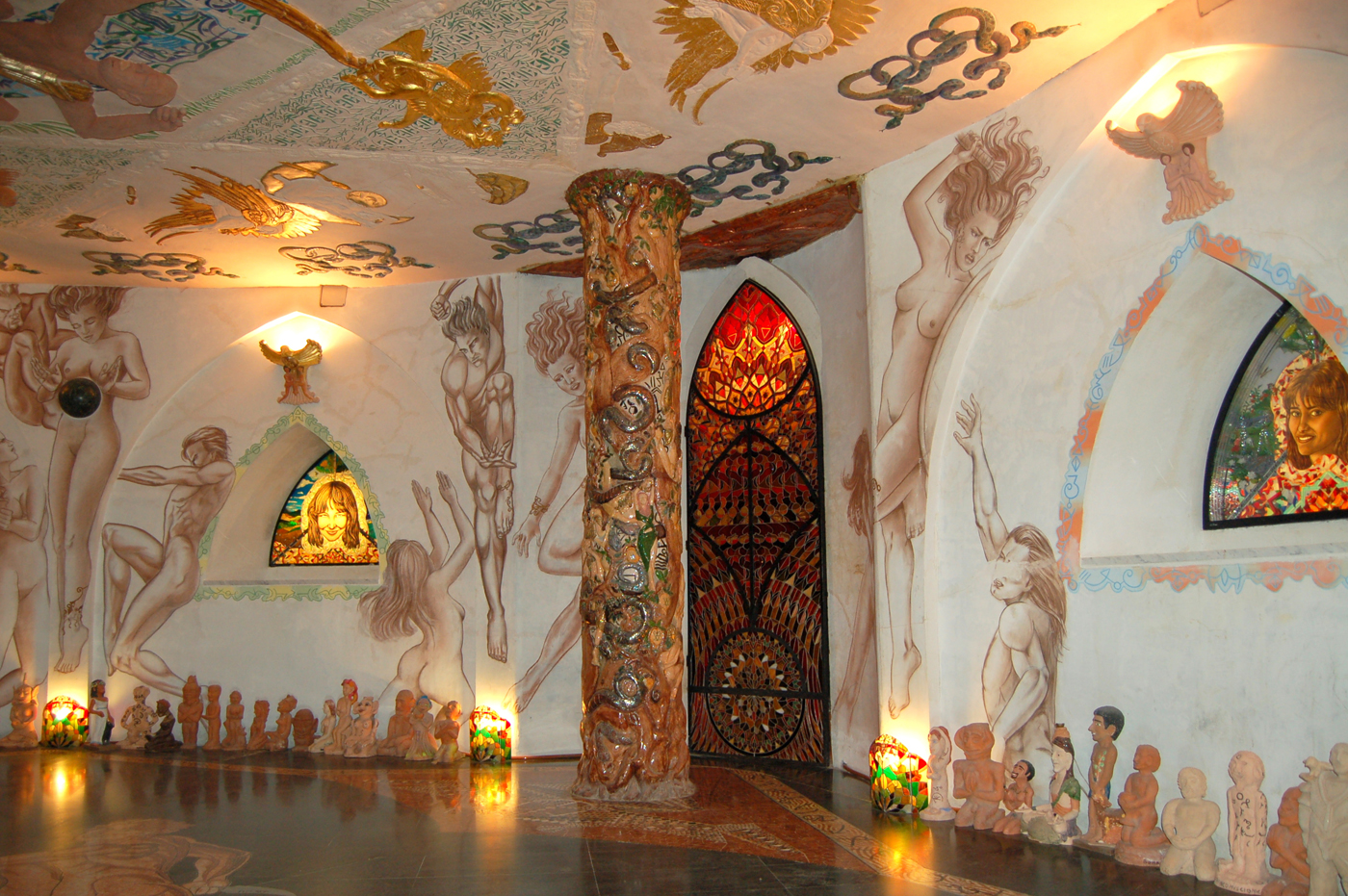