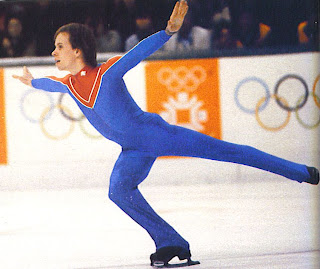 When he was two years old, this adopted child of two  college professors suddenly and inexplicably stopped growing, and his health started to fail. A team of doctors gave him six months to live after they diagnosed him as suffering from a rare disease that inhibits digestion and nutrients in food. Intravenous feeding’s of vitamins and supplements allowed him to regain his strength, but his growth was permanently stunted.

Confined to hospitals for long periods of time, until the age of nine, he quietly plotted his revenge on the kids who taunted him and called him  “peanut.” He recalled many years later that subconsciously “the whole  experience made me want to succeed at something athletic.” Sometimes his sister, Susan, went ice skating at the local rink, and he would go along to watch. There he stood, a frail, under grown kid, with a feeding tube inserted through his nose and down into his stomach…