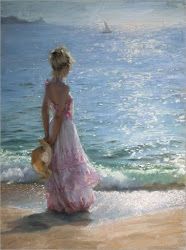 “I Am Standing Upon The Seashore”

I am standing upon the seashore. A ship, at my side,
spreads her white sails to the moving breeze and starts
for the blue ocean. She is an object of beauty and strength.
I stand and watch her until, at length, she hangs like a speck
of white cloud just where the sea and sky come to mingle with each other.

Then, someone at my side says, “There, she is gone”

Gone from my sight. That is all. She is just as large in mast,
hull and spar as she was when she left my side.
And, she is just as able to bear her load of living freight to her destined port.

Her diminished size is in me — not in her.
And, just at the moment when someone says, “There, she is gone,”
there are other eyes watching her coming, and other voices
ready to take up the glad shout, “Here she comes!”

And that is dying…

Death comes in its own time, in its own way.
Death is as unique as the individual experiencing it.

Regarding the author of this poem, thank you Trina for bringing it to my attention: I had the authorship as Henry Van Dyke, however, following your recent findings, this is what I found in Wikipedia:

“Gone From My Sight,” also known as the “Parable of Immortality” and “What Is Dying” is a poem (or prose poem) presumably written by the Rev. Luther F. Beecher (1813-1903). At least three publications credit the poem to Luther Beecher in printings shortly after his death in 1904.

However, it is often attributed to Henry Van Dyke, probably due to his name appearing as the author in a widely distributed booklet by Barbara Karnes entitled “Gone from My Sight.” This “little blue book” has been in print continuously since 1985 and has sold over twelve million copies. Hospice agencies often distribute it to families of patients nearing the end of life. It is also often read at funerals and memorial services.Transylvanian Dutch: Genealogy and Family History, “Poetry Friday: What is Dying – Luther F Beecher.”