The towering ancient Douglas-fir trees, are majestic pillars, some are as wide as  9 meters or almost 30 feet in circumference. Others are ancient Western red cedars, all survivors of a fire 300 hundred years ago, and a severe windstorm in 1997 which made quite a destruction and toppled hundreds of huge trees, obliterating many sections of the trail system. Some of the sections were so badly destroyed that have never been re-opened. 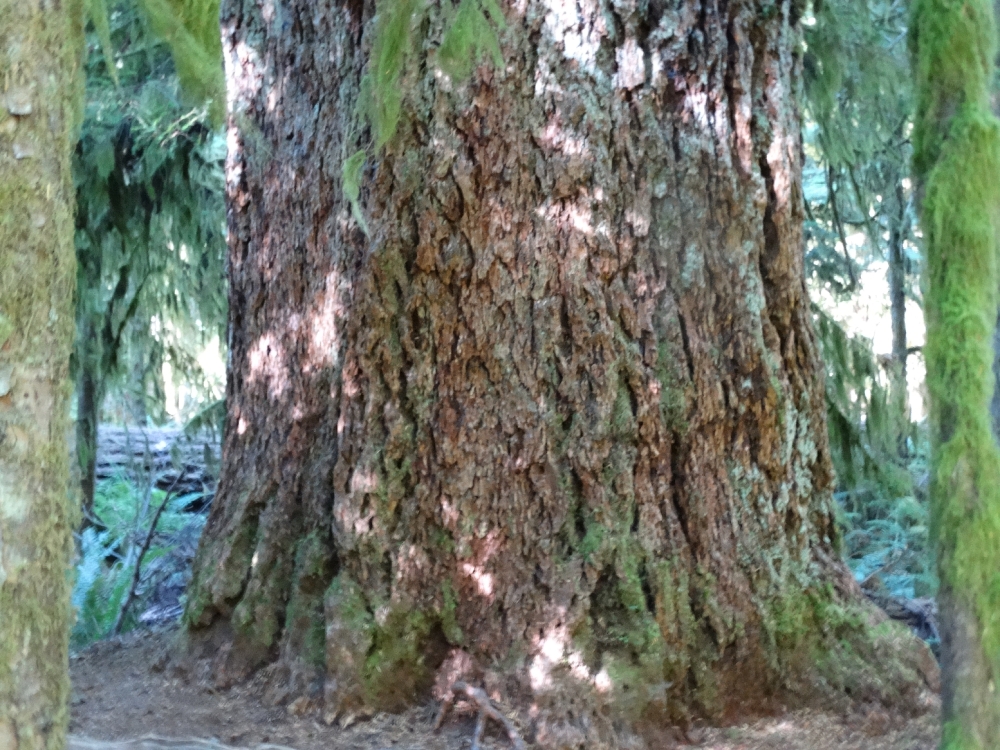 However, there is so much wisdom in Nature, that those fallen trees are just as valuable because they have become “nurseries” for the beginning of new life. They provide shelter and nutrients for new growth, new diverse  plants, and other animal life forms. The fallen trees left an open space in the canopy allowing light to get through, reaching new generations of plants .

I am sure that this process of natural regeneration may have happened many times throughout history, and the forest remains a victorious witness through all the many storms….

It is magical, with giant ferns and moss growing on old branches, and trees so wide you could not hug with both arms opened, and so tall that touched the sky. In fact, it takes several people joining hands to form a circle around some of these trees. The treetops mesh together high above your head to form a cathedral-like ceiling (Cathedral Grove Forest)

As you enter the forest, it invokes respect, awe, reverence and silence.  You want to be careful as you walk through it…not to disturb the peace, the magic and the secrets guarded for centuries.

It was an honor to witness such beauty. I felt so small surrounded by these gentle giants. Without trees, our planet would not have oxygen, and all life forms, including humanity, would soon perish. They are such a priceless and vital gift to all living creatures! They inspired me with so much gratitude!

On the other hand, I was saddened by a bunch of people that suddenly appeared and started walking carelessly through the forest, talking on their cell phones, playing their loud music, totally unaware of their children who were running like a wild stampede, screaming and trying to kill the little frogs resting on the barks of the trees…I encouraged them to take pictures instead, this seemed to help. 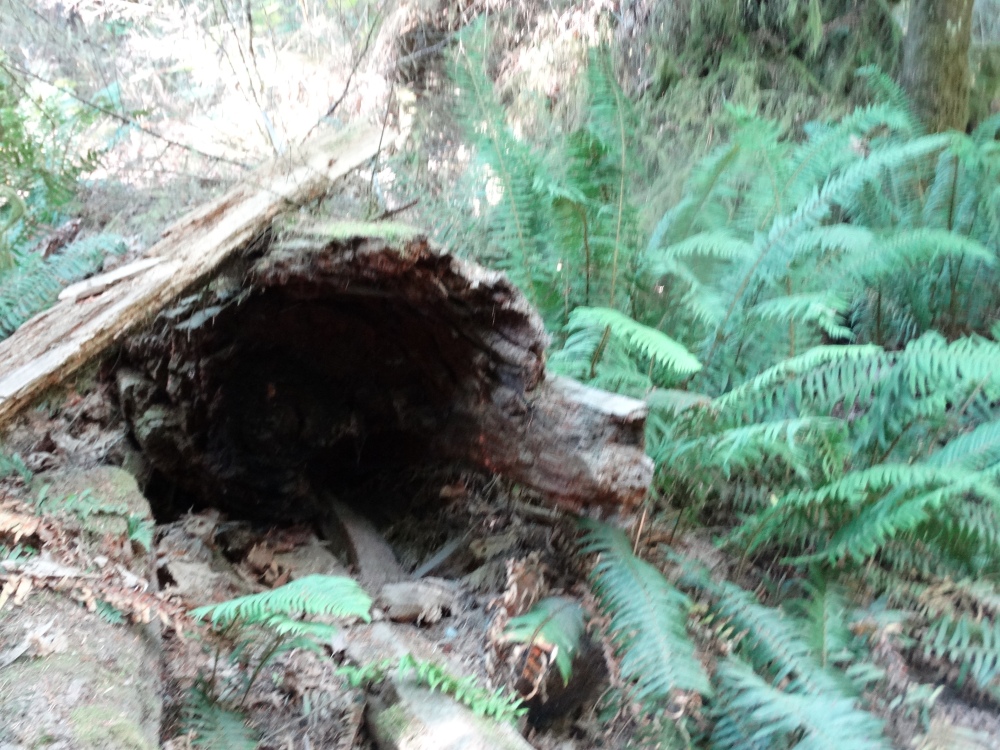 I would have liked to sit there and offered the children to quietly sit with me, so I could tell them stories about those giant magical trees, thus their interest would awaken and they could learn to appreciate, love and care for some of the enchanted forests that are still being preserved…

When the group got closed to me, I stayed out of their way, at the edge of the path, until the noisy wave,  it was actually more like the “human hurricane” had passed, and the peaceful whispers of the forest were once again heard.

There were signs in the forest, requesting that visitors walked in the trails built to preserve the new growth of the forest which can take many decades or longer to regenerate, and yet I saw people jumping over the railings of the built trails, and walking through the new growth, stumping and crashing everything under their footsteps to get a shortcut, in their brief visit of destruction, without the slightest concern about the consequences of their actions…

The park is relatively small in size (about 300 hectares) and very vulnerable due to the high impact of the many annual visitors. Efforts are geared  to protecting this legacy but it is up to each of us to take responsibility for our actions, and to be mindful of the example and guidance we give to our future generations. 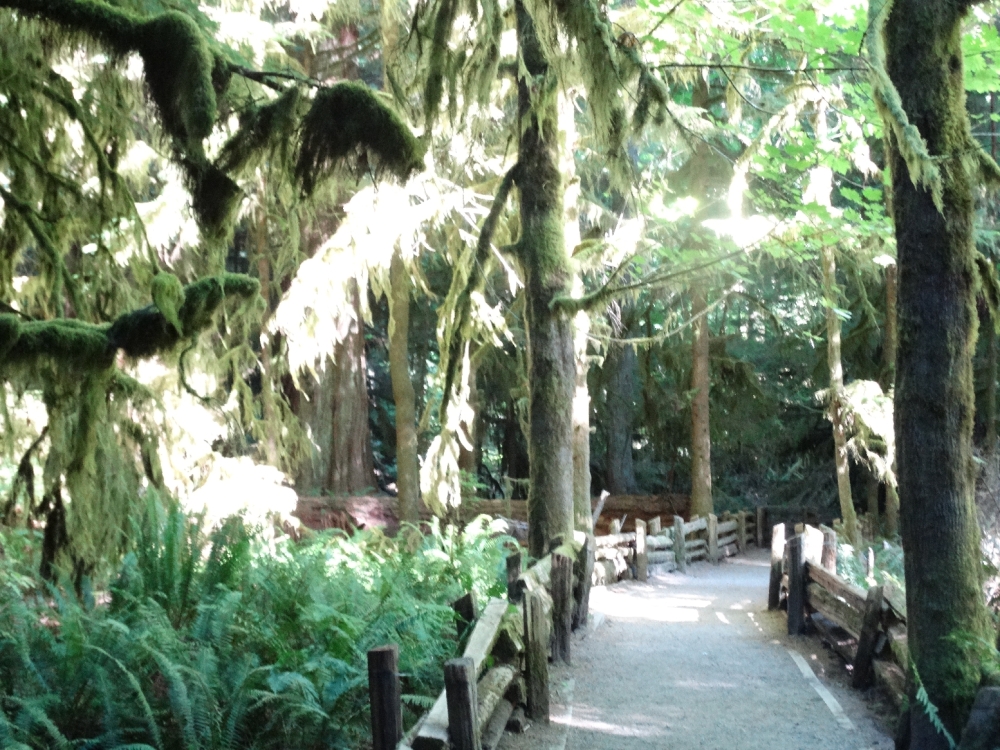 Thankfully,  there is always hope in humanity! The citizens’ organizations, The Associated Boards of Trade of Vancouver Island, petitioned the government in 1929 to preserve this forest, for the public benefit, and since then there have been many projects and volunteers that continue to support and join efforts toward the preservation of these remaining treasures. I know this is happening in many other places in the world. Internationally, people are making efforts to preserve plant and animal lives, open spaces of great beauty, and ocean sanctuaries.

I took a few slow deep breaths of that fresh, cool and lightly pine scented air, and I tried to absorb all the different shades of green that my eyes could see, while feeling the immense peace, tranquility and serenity of the imperturbable forest.

I visited a 800 year old forest, and it left tree-prints in my heart!

(I took these pictures while in the park, and below is my husband who is 6 feet tall, for a height reference.) 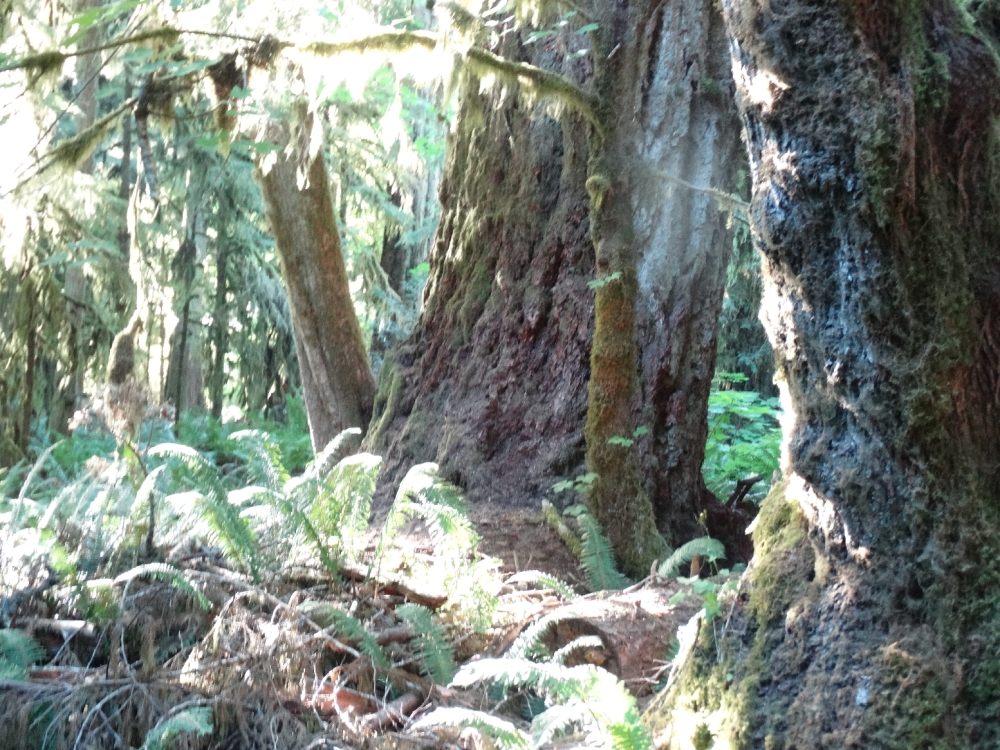 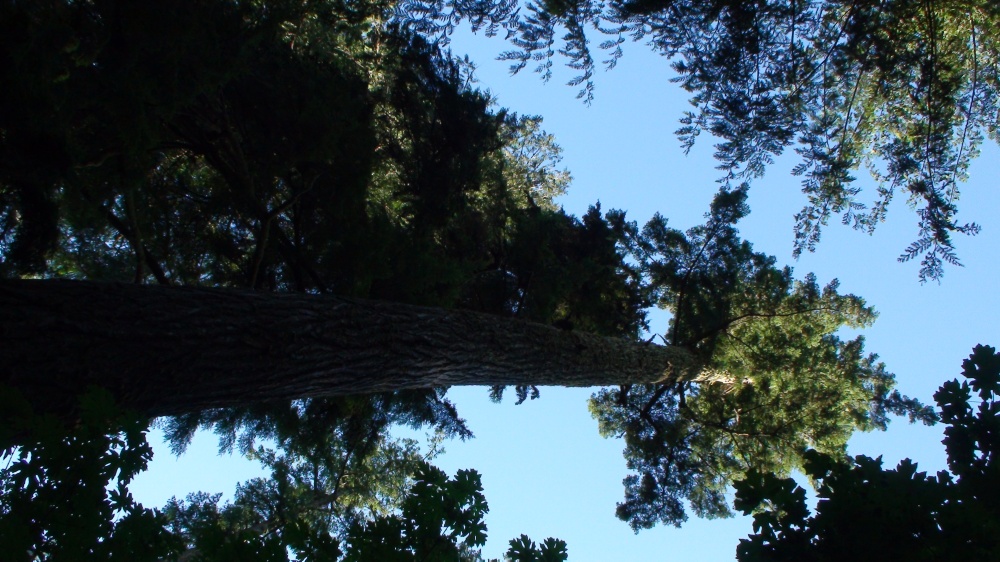